Ebb is one of Floosie's beautiful daughters by Fargo. Antonia and I co own her and she lives with Antonia and her family. We are really excited about this young lady and she has made a great start to her show career by qualifying for Crufts. 2013 was a quiet year as far as showing goes as we gave Ebb time to mature, she produced two beautiful litters in April 2014 and February 2016. 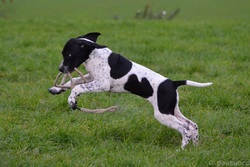 Rogue is from Woody's first litter out of Floosie .... Rogue was 'run on' for a while but when a lovely home with Lucy became available I couldn't deny him ... be happy gorgeous. 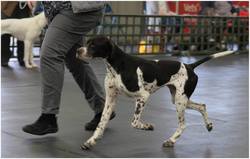 Having reared her second and last litter Truffle has moved in with Suzanne and Terry Fletcher to enjoy a well earned retirement. Truffle is a daughter of much missed Riot and gorgeous Kelt .... just like her mother she is a determined character ! 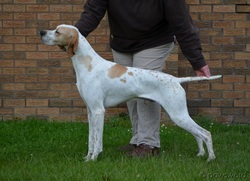 Fargo  joined the Tomlow kennel as a 'fair exchange is no robbery' for the Hawkfield kennel securing Floosie. He then moved back to Hawkfield to further his education and we are very pleased that he is now co-owned between the Tomlow and Hawkfield Kennels.  He started his showing career with a qualification for Crufts 2010. In March 2010 he delighted us by winning Best Puppy in Show, Best Dog and Reserve Best in Show at the Southern Pointer Club Breed Open Show. He is a lovely boy and reminds me very much of his mum ( H. Seabreeze ) and his older half brother Kelt ( H. Sunkissed Sea ) he is from his father Cracker's (H. Lets Go Crackers ) first litter. Fargo's first litter out of Floosie are very nice and have had a good first year in the showring. Fargo has moved to Switzerland to be Nina's new walking partner, we are sure they will have many adventures together. 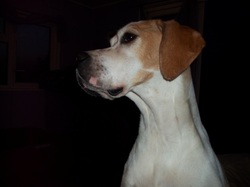 Seren is Breeze's gorgeous daughter. Seren, along with her litter brother Kelt, was retained by the Hawkfield Kennel to hopefully continue with a family of quality Pointers we like to look at and live with. Seren is personality plus and she just about managed to contain herself long enough to win Best overall Pointer puppy bitch at South Wales Championship Show. She has continued to win well including Post Graduate at the Southern Pointer Club Ch Show in the summer of 2010. Seren was mated soon after but sadly they were stillborn, after being given time to recover we tried again and Seren produced two beautiful babies one of which, Giddy, has been retained. Seren has continued with her show career and gained her stud book number. In 2012 Seren moved in with the Roberts family and we look forward to watching her continue with her show career and Junior Handling too. 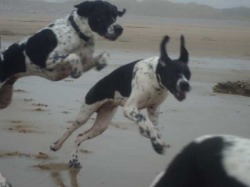 Rowsby Woof is the fourth and youngest member of Sue and Keiths family of Pointers and is very much loved. 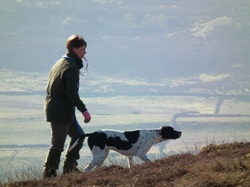 Larkin lives with Diane and her lovely Pointer girls. She has passed her Gold good citizen award and is now enjoying learning about the working side of life ... showing a natural flare. 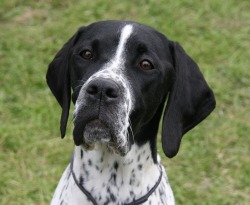 Lissom, Rowdy and Crackers sister, has also won consistantly at Championship level.  Not to be outdone by Rowdy she also gained her Junior Warrant title at LKA  in December 2008. When not in the showring she spends her time down on the farm rolling in whatever she can get her paws on ! 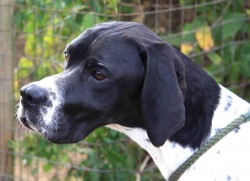 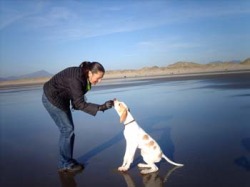 Jif lives in North Wales with Claire, Rob and the rest of the Guanabara clan. He spends his days helping keep an eye on things at home and pottering on the beautiful beaches. He is very much loved and has 'dipped his toe' in the showring.........winning Best in Show and Best Puppy in Show at Anglesey Limited Show.
In the spring of 2019 Jif has sadly been diagnosed with lung cancer but with the help of medication he is being kept comfortable and thoroughly enjoying life. 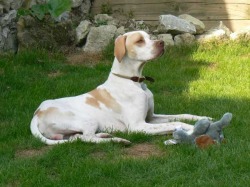 Solly is the second Lemon dog that was born in Breezes very successful litter which includes Jif ( the other Lemon ), Rowsby Woof, Kelt, Alfie, Darcy Junior, Jester, Hobson, Pebble and Seren. Solly has been very occassionally shown and at his first attempt qualified for Crufts. 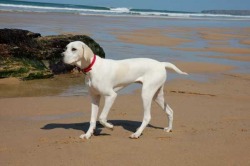 Pebble lives a wonderful life with a very loving family who worship the ground she walks on........lucky girl ! 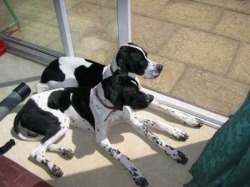 Darcy Junior and Alfie live together in Kent and frequently holiday in France....Lucky boys !! 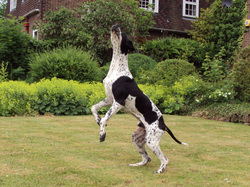 The lovely Rebel is Breeze and Crackers Son. Owned by Wendy Chaplin, he has been lightly shown thus far with some success and we follow his life with interest 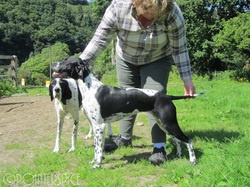 Pagan now lives by the sea in West Wales, this photo was taken when visiting her in her new home.
Powered by